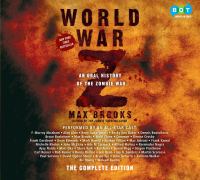 [an Oral History of the Zombie War]

This is the fictional, searing, gruesome account of the decade-long period when civilization stood on the brink of extinction due to a viral plague that transformed anyone it infected into a ghoulish creature with an appetite for living flesh, as told by the civilians, soldiers, and politicians who survived it.
Publisher: New York : Random House Audio : Books on Tape, [2013]
Edition: Complete edition
Copyright Date: ℗2013
℗2013

Ryan suggests: "There are a large number of great Post Apocalyptic books on overdrive, 2 of my favorites being World War Z by Max Brooks (so much better then the movie) written as individual narrative accounts of the zombie outbreak starting with patient zero to the aftermath, and Station El... Read More »

IT was better than the movie in some ways. The interview style that book has is fun, and lets a story betold as remembered. It does however, get boring, and not really having the action described as it happens. Better than the movie, but that doesn't say much.

Truly, the books are better than the movie. World War Z is a phenomenal narrative that contains several “interviews” following the aftermath of the Zombie War, which the author gathers the perspectives of survivors and their survival stories in a zombie plagued Earth. The confusion of the infection of the plague in remote villages to the hospitals of major hospitals will pump you full of adrenaline and anticipation. Pakistan's and Israel’s conflict, astronauts watching the globe burn before them, people seeking survival to the sea, the military breaking outside New York, are just some of the stories written as if they had taken place. World War Z was a great read and definitely recommend. Rating 4/5
@Ezekiel_Hannegan of the Yorba Linda Public Library Book Bloggers

thank you all the comments are very helpfull. Thanks

I think this book is great. Most science fiction horror stuff focuses more on the zombie, technology, or the alien in this. WWZ doesn't do that it focuses more on the international factor of this. It sees what happens to countries and politics and what happened financially. This made the book very interesting and entertaining.

Excellent audiobook and has an all star cast!

Looks at the Zombie War with a lens towards how it would realistically affect the world--in terms of politics, society, religion, and economics.

This quick read offers fans of zombie related fiction the story of a world-wide zombie epidemic told in the form of interviews with various survivors. It is actually quite interesting because it isn't from the perspective of one protagonist. It was fast paced, sometimes funny, definitely full of gross zombie details and overall a good "entry level" book for anyone looking to explore the literary world of zombies!

Not good, y'all. Really, really not good.
All the dialogue and characters seem as though they were written by a teenage boy, I constantly found myself laughing or rolling my eyes at things that were being said by the speakers and was never really able to get into the story because of how melodramatic it all was.
The voice actors were great but they weren't given great material to work with.

For some reason, the creators of this audiobook thought it necessary to skip parts of the book; sometimes whole sections, sometimes just paragraphs, seemingly indiscriminately. What it actually included was great, and I really liked the different readers, but I wanted to listen to the whole book, not just a sample.

Before listening to this audiobook, I couldn’t have cared less about zombies. They have never interested me nor held any appeal whatever. But this audiobook changed all of that. It was consistently interesting and very well researched. It did not obsess with the gore and horror associated with zombies, but presented the overall picture of a massive global conflict and how people responded differently in different regions. The narration is, with a few exceptions, extremely good. It is performed by an ensemble cast, which is a very effective approach for the content because the entire book is divided into accounts told from different persectives. Max Brooks, the author, narrates the voice of the government agent who is interviewing various people, and his performance is easily the worst. But the others are excellent and the listener will recognize many voices from their roles in film. I strongly recommend this audiobook to anyone interested in zombies, apocolypses, or just good stories.

An interesting book written from many different perspectives. This provides the reader with a wide spectrum of reaction and emotions on the zombie event and walks the reader through how different societies around the world deal with the crisis.

pink_chicken_224 thinks this title is suitable for 12 years and over

green_alligator_8759 thinks this title is suitable for 13 years and over

L97 thinks this title is suitable for 15 years and over

Ep1c thinks this title is suitable for 14 years and over

jferrerosa2 thinks this title is suitable for 13 years and over

black_hawk_403 thinks this title is suitable for 13 years and over

WestCoastFilms thinks this title is suitable for 14 years and over

violet_cat_4942 thinks this title is suitable for All Ages

Kumakmibru thinks this title is suitable for 13 years and over

Coarse Language: Quite a bit of swearing,

Violence: Gory violence in parts, however, unlike most zombie novels this one goes more for the suspense.

Frightening or Intense Scenes: Of course, people just escaping zombies, and multiple shootouts. There is quite a bit of intensity.

Coarse Language: Almost every swear word used at least once. But most are used several times.

Violence: Plenty of violence. It's a zombie horror event, you gotta expect it.

Violence: there is alot of killing and war

Violence: It's a book about dead people coming back to life and eating other people. I think it may be a TOUCH violent, don't you?

"The book of war, the one we've been writing since one ape slapped another, was completely useless in this situation. We had to write a new one from scratch."

What about your parents?
What about them? We lived in the same apartment, but I never really conversed with them. I’m sure they thought I was studying. Even when school closed I told them I still had to prepare for exams. They never questioned it. My father and I rarely spoke. In the mornings my mother would leave a breakfast tray at my door, at night she would leave dinner. The first time she didn’t leave a tray, I thought nothing of it. I woke up that morning, as I always did; gratified myself, as I always did; logged on, as I always did. It was midday before I started to feel hungry. I hated those feelings, hunger or fatigue or, the worst, sexual desire. Those were physical distractions. They annoyed me.

scary and a really good book

It's fear, dude, just fear and you don't have to be Sun freakin Tzu to know that real fighting isn't about killing or even hurting the other guy, it's about scaring him enough to call it a day. Break their spirit, that's what every successful army goes for, from tribal face paint to the "blitzkrieg" to... what did we call the first round of Gulf War Two, "Shock and Awe"? Perfect name, "Shock and Awe"! But what if the enemy can't be shocked and awed? Not just won't, but biologically can't!

There are no summaries for this title yet.