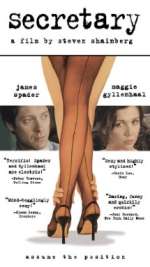 A young woman recently released from a mental health institution takes the job of secretary to a lawyer, who has problems keeping people in that position. They develop a sadomasochistic relationship and find their own brand of happiness.
Publisher: [Place of publication not identified] : Lions Gate Home Entertainment, 2003
Copyright Date: ©2002
ISBN: 9781589712973
1589712978

List - Seattle Rep's VENUS IN FUR: Beyond the Theatre

A submissive secretary finds her new position meets her every need. This darkly comic film is based on Mary Gaitskill's short story of the same name from the 1988 collection "Bad Behavior."

One day, he meets Lee Holloway (played by Maggie Gyllenhaal, Jake's older sister) a young woman freshly released from a mental asylum who still has symptoms and hires her as his secretary. They click almost immediately and it's when things get weird between them.

Unlike the younger "Mister Grey", Edward Gray (played by James Spader) is a compassionate man who knows the possible consequences should things go too far between him and Lee so therefore his strong sense of morals.

IMO, if "Secretary" was made today, it would not surprise me if women's rights movements (such as of course the "Me Too" movement) would try and get this film banned from theaters.

Overall, a great movie with brilliant chemistry between Gyllenhaal and Spader! My advice is this (even though it may come off as dumb): Just pretend the "50 Shades Trilogy" never happened because not only because IMO (but also my girlfriend's opinion) whoever thought "Twilight" fanfic would have been a great bestseller may not have been in the right mindset.

Brilliant entry into the gender wars...as we try to get each other when we are all so frightened.
no one frightened in here. each of them: one male one female, are quite fearless in achieving this self-knowledge and registering it as freedom to be taken to give to take to exchange.
it's intended to spoof to titillate MAYBE, but also to show how love breaks through the most uptight of unhappy personalities.
gutsy film. BTW, Jake's little sister is awesome.

Well, alrighty then, this was interesting.

An indie film on masochism back when James Spader was a handsome leading man vs the balding chubby Reddington in the current TV series "The Blacklist." Maggie Gyllenhaal was the same sexy protagonist here as her recent BBC character in "The Honourable Woman 2014". Saw this years ago but the unusual opening sequence and those "mature" scenes were hard to forget. Lionsgate is marketing this anew appropriately with this blurt:

Before FIFTY SHADES OF GREY, there was SECRETARY. James Spader leads this sexy and daring comedy as the original Mr. Grey, a seemingly normal lawyer whose relationship with his new secretary (Maggie Gyllenhaal) descends into a kinky affair that would give nightmares to any human resource director!

I've seen this movie twice now. I think it's a very affecting and honest story. In a sense, I find it a wonderful love story, if a little unusual though.

If you're longing for the next time you'll be spanked while bent over your boss's desk, then this might be the movie for you. Personally, Mr. E. Edward Grey wouldn't have gotten away with ANY of the things he did with his secretary, Lee, in this movie. That's why we have sexual harassment laws. I wouldn't of answered the overly personal and invasive questions he asked Lee(even during the job interview). So, I guess, I wouldn't have gotten the job. But, then again, I'm NO submissive. "Mr. Grey, assume the position."

And another thing: E. Edward Grey had a strange notion of what constitutes a healthy portion size. He tried to practically starve Lee at dinner. I don't think even Christian Grey would approve. "A woman needs to eat!"

The acting was very good and there were times it had me hanging on just waiting to see what would happen next but in the end it didn't quite hit the home run. Having read the reviews here prior to viewing, I think I had high expectations but somehow ended up feeling cheated. I haven't seen Fifty Shades yet so I can't compare. This movie left me feeling like I was rounding third but would always be denied the orgasm. This could've been a blockbuster if they had added some real steam to compliment the powerful emotions. Instead it just kind of teases you along.

This movie is NOT for everyone. The acting in the movie is great. The movie keeps you on your toes. There were some moments where I was like "what exactly is about to happen here?". There are moments that will make you blush or giggle. My only complaint is the ending, I was expecting something slightly different.

Probably the best film about a consensual dominant/submissive relationship ever made !! ( Kev's PICkS : For an interesting double feature ,.. see this film in tandem with "The Blue Angel".)

The funny thing is, this movie came out in 2003. That's nearly ten years before that cheeky chick lit 50 shades took the world by storm. See the movie, you'll get it. 50 shades, which I haven't read, devulges into all the rules of a truly cruel dominant, but Maggie's character knew what made James Spader tick. You just get it right away. No 1,000s of pages neccessary. Highly Recommended.

Atticus14 thinks this title is suitable for 18 years and over

Monuu thinks this title is suitable for 16 years and over

nl345 thinks this title is suitable for 17 years and over

Pages and pages of quotes in IMDb. These two are on sexual harassment and "cutter", people who do self-harm:
===
Woman: He asked me out to Red Lobster the other night for a nightcap. And yesterday he asked if my hose were control top... and if they were, I certainly didn't need it.
Sister: Your boss?
Woman: Yeah.
Sister: You should sue him for sexual harassment.
...
Lee: My lawyer's representing a woman who's suing her boss for sexual harassment.
-Is he a good lawyer?
(Lee moans:) He's the best.
===
Why do you cut yourself, Lee?
-I don't know.
Is it that sometimes the pain inside has to come to the surface and when you see evidence of the pain inside, you finally know you're really here? Then, when you watch the wound heal, it's comforting. Isn't it?
-I... That's a way to put it.

I saw this a long time ago . I still like it. Makes me a Maggie fan all over again.

I don'tknow why I like this film so much. I guess to me it has a happy ending.