Saved Searches Advanced Search
Air Quality Alert - Due to poor air quality, the Library is unable to provide Curbside Service on Sept. 18. For information on rescheduled appointments see our Curbside Service page.
Catalog Outage Sunday, Sept. 20 - Our catalog will be unavailable between 5 a.m. and 7 a.m. on Sunday, Sept. 20 for system maintenance. During that time, you may use our former catalog.
Holds Now Available - You can now place up to 25 holds on physical items for curbside pickup at 7 Library locations. Learn more about curbside pickup here
Libraries closed - All Library locations remain closed to limit the spread of COVID-19.  Select locations are now offering limited curbside pickup service, and 12 locations are now accepting returns during limited hours. Find the latest updates on our Road to Reopening here.
Print 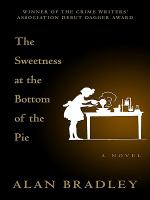 The Sweetness at the Bottom of the Pie

In his wickedly brilliant first novel, Debut Dagger Award winner Alan Bradley introduces one of the most singular and engaging heroines in recent fiction: eleven-year-old Flavia de Luce, an aspiring chemist with a passion for poison. It is the summer of 1950--and a series of inexplicable events has struck Buckshaw, the decaying English mansion that Flavia's family calls home. A dead bird is found on the doorstep, a postage stamp bizarrely pinned to its beak. Hours later, Flavia finds a man lying in the cucumber patch and watches him as he takes his dying breath. For Flavia, who is both appalled and delighted, life begins in earnest when murder comes to Buckshaw. I wish I could say I was afraid, but I wasn't. Quite the contrary. This was by far the most interesting thing that had ever happened to me in my entire life.
To Flavia the investigation is the stuff of science: full of possibilities, contradictions, and connections. Soon her father, a man raising his three daughters alone, is seized, accused of murder. And in a police cell, during a violent thunderstorm, Colonel de Luce tells his daughter an astounding story--of a schoolboy friendship turned ugly, of a priceless object that vanished in a bizarre and brazen act of thievery, of a Latin teacher who flung himself to his death from the school's tower thirty years before. Now Flavia is armed with more than enough knowledge to tie two distant deaths together, to examine new suspects, and begin a search that will lead her all the way to the King of England himself. Of this much the girl is sure: her father is innocent of murder--but protecting her and her sisters from something even worse....
An enthralling mystery, a piercing depiction of class and society, The Sweetness at the Bottom of the Pie is a masterfully told tale of deceptions--and a rich literary delight. From the Hardcover edition.
Publisher: Waterville, Me. : Thorndike Press, 2009
Edition: Large print edition
ISBN: 9781410419170
1410419177

Flavia de Luce is a force of nature. Quirky, intelligent and wildly funny, she is undaunted by pretty much anything life throws at her, and when you are 11 and a chemistry buff and an amateur detective, that says something. Set in the English countryside in 1950, this book is for mystery lovers, ... Read More »

Reminiscent of Nancy Drew and Sherlock Holmes, our heroine Flavia is both brilliant and endearing. The narrative is woven with so many details to build both the characters and the mystery. I genuinely thought a mystery involving an old stamp set in England would be musty and boring; instead, it felt like the reader is side by side with young Flavia as she is subjected to the torments of older sisters and the investigations she jumps into. Highly recommend for tweens to adults who enjoy a good detective tale.

This series is incredible and makes me smile listening to it, the audiobooks are perfect and completely hilarious. Might be my favorite series of all time.

Series recommended by Godsel. This is first featuring 11 yoa Flavia DeLuce. Challenging vocab, not sure if want to finish series.

I thoroughly enjoy Flavia. All of the book in this series make me happy.

Once I suspended my disbelief about Flavia's age because that was just ridiculous it was a fun mystery.

Funny story - I've tried reading this book, I think, 3 times before both in audio and print and could never finish it. But now I have finished it! *jazz hands* And it was really enjoyable.

I had been reading a lot of non-fiction that dealt with some heavy topics that were hitting me right in the feels and wanted something that was light but still witty and smart. This fit the bill! Flavia is such a wonderful main character to live through and she makes me wish I liked/was good at chemistry (alas, I am not, nor shall I ever be). For whatever reason, the narrator's voice didn't get on my nerves as it did before and I actually was impressed with it this time around. The narrator does a perfect voice for Flavia. And though this is classified at my library as adult mystery, I think a middle schooler who is of strong mental disposition (interpret as you will) would enjoy this and be appropriate.

Eleven-year-old Flavia de Luce is understandably surprised to discover a dying man late one night in the garden of her family's English estate. When the investigators' suspicions come to rest on her own father as murderer, she resolves to solve the mystery first. Our heroine, a wunderkind in the field of chemistry, is also charmingly plucky and exceedingly entertaining. I'll definitely read further into this series.

I had heard about this book and had to wait a little before I could check it out, but it was definitely worth it. Flavia de Luce is an adorable character (well, her sisters would not agree, but still): she is (occasionally) compassionate, very smart, an expert chemist, curious and brave. Did I mention she is also a would-be poisoner? I don't think there are many 11-year-old sleuth in literature, but if there are, they cannot hold a candle to Flavia! The story is very original and rather complex. You need a background in the history of Victorian stamps, but the author, Alan Bradley, provides it in a relaxing and interesting way, so that you learn while enjoying yourself, and those are the best kind of books, if you ask me! There are also some serious themes, such as the war or the loss of a parent, and you feel that they are part of the world where Flavia lives and she knows how to deal with them. Well, I cannot wait to read the other adventures of my new favorite detective. I have actually already got the second novel on my Kindle!

CORI D. MORRIS thinks this title is suitable for 10 years and over

mlabreche11 thinks this title is suitable for 12 years and over

cino1 thinks this title is suitable for All Ages

hil_elrick thinks this title is suitable for 10 years and over

Amie thinks this title is suitable for 13 years and over

Like murder mysteries? Can you compete with an amateur chemistry student who is 11 years old? Funny, unexpected murder mystery with a likeable, young heroine! Watch out - her specialty is poisons!

Flavia de Luce is an 11 yr. old chemistry whiz. She has two older sisters with whom she is at odds. Her father, a philatelist, is distant and unavailable and she is largely parented by the housekeeper and the gardener. She helps solve the murder of one of her father's school friends who is found dead in the garden.

An adult book but can be read by advanced younger readers. Main character is a young, strong female who finds herself in danger while investigating a mystery that arrived at her doorstep.

"As I stood outside Cow Lane, it occurred to me that Heaven must be a place where the library is open twenty-four hours a day, seven days a week.

"As I stood outside Cow Lane, it occurred to me that Heaven must be a place where the library is open twenty-four hours a day, seven days a week.

“I remembered a piece of sisterly advice, which Feely once gave Daffy and me:
"If ever you're accosted by a man," she'd said, "kick him in the Casanovas and run like blue blazes!"
Although it had sounded at the time like a useful bit of intelligence, the only problem was that I didn't know where the Casanovas were located.
I'd have to think of something else.”

I wish I could say I was afraid, but I wasn't. Quite the contrary. This was by far the most interesting thing that had ever happened to me in my entire life.