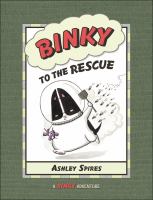 Binky to the Rescue

While in hot pursuit of an alien invader (a bug), Binky accidentally falls out the space station porthole (bathroom window) and finds himself in outer space (outside) for the very first time. But just as Binky begins to explore, he discovers that his copilot, Ted (stuffed mousie), is trapped beneath an enemy warship (wasps' nest)! Binky must rescue Ted from the clutches of these evil aliens. Will he be able to save his best friend? Can Ted survive his ordeal? Does Binky still suffer from space gas?
Publisher: Toronto ; New York : Kids Can Press, [2010]
Copyright Date: ©2010
ISBN: 9781554535026
1554535026
9781554535972
1554535972

I love this series! I look after a toddler that loves to get stuck in tantrums over every little thing, especially his lovey. Binky can be dramatic when things go wrong, but he always forms a plan after. It's very helpful to just interupt the kid's fit with "what would Binky do?" and work on a plan to calmly get him what he wants. We are working our way through the series with great success.

You could probably make some comparisons between Binky’s extended fantasy life and that found in the picture book The Secret Life of Walter Kitty. The difference, of course, is that while Walter could never concentrate on a single fantasy, Binky is faithful to his belief that he is a space cat. The evidence, after all, is overwhelming. Bugs = aliens. The outdoors = outer space. Easy peasy. The end result is a book that will interest emerging readers and older readers equally. If we were asked to send a cat into space, Binky would be my first choice. Visually stimulating and a lot of fun, this is great addition to any graphic novel collection. Worthy.

While in hot pursuit of an alien invader (a bug), Binky accidentally falls out of the space station porthole (bathroom window) for the very first time. But just as Binky begins to explore, he discovers that his copilot Ted (stuffed mouse) is trapped beneath an enemy warship (wasps nest)! Binky must rescue Ted from the clutches of these evil aliens.GE

Another hilarious Binky book! This book is perfect for 6 year old boys and enjoyable for adults too!

My four and a half year old loves this book - and his parents get a kick out of it, too. (It's longer than most picture books, but so fun and compelling that we always finish it in one sitting.)

Binky honestly makes me laugh, and this is a great book for early readers.

A really fun read even for adults!

vernessa7 thinks this title is suitable for 6 years and over

red_bee_499 thinks this title is suitable for All Ages

red_shark_333 thinks this title is suitable for 8 years and under

blue_rabbit_308 thinks this title is suitable for 9 years and over

Red_Chicken_97 thinks this title is suitable for All Ages

binky chases away an alien but falls out the window with his pretend pet ted (co-pilot) he gets away from many other aliens but leaves ted behind and many times he fails to get ted but then succeeds by digging a tunnel from the space station to space. by michael

The life of your average, everyday spacecat is never easy. Binky doesn’t really live in a space station, but try telling him that. With so many invading aliens/moths to defeat, it’s little wonder that he keeps so busy. One day, while routinely chasing an alien around and about the home, Binky accidentally leaps through a screen window and finds himself in outer space/the outdoors. Worst of all, his beloved mousie toy Ted (and co-pilot) has fallen out as well. Binky is rescued by his humans but Ted is left in the clutches of the enemy (wasps). Now Binky must find a way to locate and save his best friend, no matter what the cost.

quoted from book by michael while he is collecting specimens binky catches sight of a familiar shape nearby.