Saved Searches Advanced Search
Masks Required at the Library - Library services and mask requirements have not changed as a result of guidance from the CDC and the state. The Library will continue to make new locations and services available in coming weeks. Find currently available Library services at www.spl.org/RoadToReopening.
Print 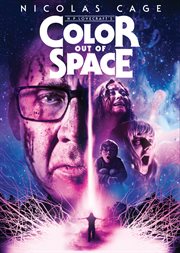 Color Out of Space

Alternative Title: Colour out of space

Pretty good in a "Cagey" sort of way. If you like sci-fi, horror and Cage, watch this one!

Just Weird, Started with a spell to heal her mother and went Down Hill from there.

Absolutely loved it. This is my favorite Lovecraft story, and Tommy Chong's monologue, which was pretty much word-for-word from the story, gave me CHILLS. Plus, A+ Nic Cage freakout.

One star just for being a cabin-in-the-woods modern horror, if that's what you enjoy. I do not. The twist was simply a lot of psychedelic CG to represent the bad guy/evil/alien/possession/whatever man. College students could concoct a drinking game from the impossible character actions.

How much has to go wrong before characters feel the need to speak to each other? Not now dad, I'm busy feeding the Llamas! I expected Cage to start yelling "Not the bees!"

The main problem was that everything that happened was so artificially impossible I started throwing things at the screen. The entire movie would have lasted ten minutes if everybody just walked away at the first sign of weird, but not only do they leave for various reasons, they come back. The first sign of weird was actually each other. They could have gone, unlike the Shining weather or spaceships or any other contrived circumstance from comparable stories. Not these guys though, their particular insanity was enhanced by the family unit, reflecting and inflating each other's crazy until total crazy went asymptotic. I'm glad the ending was such a CG OD mess of nothing, as it fit the story.

I suspect the original story was old enough that it might not have seemed so tired, from witnessing so much of the same between then and the now.

This horror-fantasy film appears foreboding and haunting with a weird, if not silly, imagination.
If you view this movie, you should be able to understand that imagination has no limit---the sky is NOT definitely the limit.

Poor acting and bad pacing removes any of h.p. lovecrafts story's suspense. Unlikeable characters do not help this movie. This is one of those movies where you keep asking how people can act so stupidly. Not worth your viewing time!

If you like campy horror B movies with body horror then you will enjoy this movie. Nicolas Cage's over acting works perfectly with the premise of this movie: A meteor lands in a family's front yard infecting their drinking water and the surrounding forest with a controlling, mutating alien life form. The monster designs are disgusting (in a good way). The set design with all the colors adds some great visuals. The two big names, Nicolas Cage and Tommy Chong, are perfect.

The dialogue feels forced and weird throughout most of the movie. Cage pulls it off because that's his style now, but the rest of the cast feels awkward. The characters don't just make bad horror movie decisions, but decisions overall that don't make sense (why is a hydrologist the go to authority on an alien life force?). The writing is not great and neither is the directing but it's a fun movie to laugh at with some great sci-fi visuals.

The movie is based off of a short story by H.P. Lovecraft which I haven't read so I don't know how it compares to the source material but you probably don't need to in order to enjoy it.

Whether from outer space or another dimension these are aliens with bad intention who have the ability to influence, reshape, and destroy the area they inhabit. Unfortunately, for Nicholas Cage's family that area is his farm. Much of the alien occupied farm is reminiscent of past dimensional crazy zones where aliens rule and make short work of humans in that zone such as From Beyond and Annihilation (the Shimmer). In the end the aliens put on a great light show but still didn't reveal what they wanted.

West of Arkham... the hills rise wild... and there are valleys with deep woods that no ax has ever cut. There are dark, narrow glens where the trees slope fantastically... where thin brooklets trickle without ever having caught the glimpse of sunlight. When I went into the hills and vales to survey for the new reservoir, they told me the place was evil. They told me this in Arkham, and because that is a very old town, full of witch legends, I thought the evil must be something which grandams had whispered to children through centuries. Then I saw the dark westward tangle of glens and slopes for myself... and ceased to wonder at anything besides its own elder mystery.

Besides the screams and yelling, meaningful dialogue are on the pseudo science of the film:

Something sucked the charge out of the battery overnight. Probably the same thing that's screwing with the cells and the computers. It's like
an electromagnetic field.
-And you believe me now?
I don't know what I believe anymore.
===
Nothing. Nothing. Nothing. Nothing.
- Ezra?
Cold and wet. But it burns.
-I'm going in.
Sucking the life out of everything.
-Ezra?
It came down in the rock. It lives in the well.
-Ezra?
It grew down there. Poisoning everything. Changing everything. Into something like the world it came from. Into what it knows. We all know it's coming, but we can't get away. It's got everything that lives. They all drunk the water. It got strong. Fed itself on them. It came from the stars... where things ain't like they are here. It's just a color. But it burns. It sucks, and it burns. It burns.

What exactly am I supposed to be listening to?
-The people under the floor, dude. The aliens. They're there.
Well, yeah, it is strange. But it's probably geothermal activity or magnetic distortions.
-No, no. Something like that. They came on the rock.
Look, no offense, Ezra, but that's pretty out there.
-You don't get it, do you? It's not out there. It's in here. It's in the static. It's in the moisture. Up is down. Fast is slow. What's in here is out there, and what's out there is in here now. Comprendo?
===
There are only a few of us that remember the strange days now. What touched this place cannot be quantified or understood by human science. It was just a color out of space. A messenger from realms whose existence stuns the brain and numbs us with the gulfs that it throws open before our frenzied eyes.

walls187 thinks this title is suitable for 12 years and over

There are no summaries for this title yet.